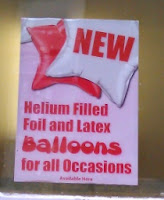 Now I like a balloon as much as the next person {rather more, in fact, than a former colleague who had a genuine phobia of them} but I find it difficult to believe that they'd be appropriate for ALL occasions.  Surely not at  funeral? Mind you, I've seen black ones with a skull and crossbones on in Wales {Conwy, I think - they're big on pirates there} but they'd probably be a bit too Gothy for most people.  On reflection though, I rather fancy white balloons for my funeral - the gathered multitudes could release them all together... ooh, and maybe tie a card on each one with my picture, and give a prize for the one that went the furthest!  Ok, praps not.

Anyway, when I pointed out this sign to some friends the other night, we found it surprisingly difficult to think of an occasion that wouldn't be enhanced by a balloon.  I did wonder about grocery shopping but was told by everyone, very firmly, that this is not an 'Occasion'.  {My friends get out rather more than I do.} Besides, shopping is such a grim experience, anything to cheer it up gets my vote.

Which brings me to Mystery Number One: Why do most of us find balloons so attractive?  And are there any occasions where they would always be wrong?

We went on to the pub.  {Yes, we did have the previous conversation when we were all stone cold sober.} After a while, one of our group went to the Ladies, and came back giggling.  "You've got to see this," she told me.  And she was right.  It was a bit tricky trying to get far enough away to take the picture, but I knew I had to share this.

Mystery Number Two:  If you were in the toilet looking for the paper, however drunk you might be, why would you not look in the dispenser first?  More worryingly, what else would you think might  be in the large metal box on the wall of the cubicle - snacks to appease the Toilet Monster?

After all that excitement, I decided to clear out my carrier bag drawer yesterday.  {Don't mock; you know you've got one as well.}  I'm not talking about the flimsy, supermarket bags that I use as kitchen bin liners; they're under the sink. The larger bags are supposed to share a drawer with the teatowels but, since I could no longer open the drawer fully I've had to poke the teatowels in with my fingertips, so the drawer didn't shut properly either.

You will note that I have kept a few bags; these were the more attractive and unusual ones, for when I have to use a bag and want to look as if I shop in interesting places.

And this is what I've taken out.  {My floor tiles are a good 30cm square.} 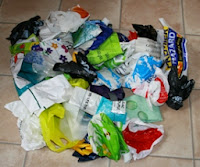 18 'bags for life'.  This is probably an accurate prediction, as they never get reused.
4 similar bags which make no claims for their durability, but seem pretty sturdy.
7 thinner bags of average size.
7 small ones from interesting shops, including 2 transparent ones- why did I ever think I'd use those again? If I use a small bag it's because I don't want people to see what's in it!


Mystery Number Three: Why do we all keep so many carrier bags?  And why is it such a wrench to throw them away? 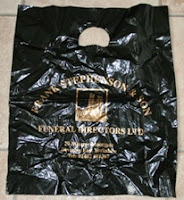 Oh, and Mystery Number Four:  What in the name of all that's portable did they expect to need carrier bags for in this establishment?

I really don't want to know... unless, of course, it's for balloons!
Posted by Val Ross at 3:09 pm No comments: