This is my £15 rescue table, after two hours' work and an entire sheet of sandpaper.  And you really don't want to see my fingernails!  Perhaps next time I should wear my gardening gloves - the big stiff suede-y ones that are useless for gardening in.
Yes, I know, it would probably be much easier to slap on a load of chemical gloop, and then scrape the varnish off, but I have my reasons for not doing that:

1. I'd need an awful lot, and I can't afford to buy it.  I'd need a scraper as well, since I don't think it would be a good idea to use cutlery, but I can't afford one of those either.  That's why I only spent £15 on the table.
2. I'd have to work outdoors, or with the windows open, so as not to be overcome by the fumes.  I don't think so!  It's autumn now, and damn cold; I don't intend opening my windows again until at least June next year.  Besides, sandpapering has the added bonus of keeping me warm while I do it, so I can turn the heating off for a bit.  I did need a bath afterwards, so I suppose that was no real gain in terms of cost, but at least I might have lost a bit of weight.
3. My beloved suggested that the surface of the table might be veneer, rather than solid wood, so it might lift off or corrode if I used the gloop.  However, he did treat me to the sandpaper.  He really knows how to show a girl a good time!

Why am I trying to renovate an old table anyway? Well, it's part of my plan to transform my spare bedroom.  When the table flaps are open it'll be a good size for working on and, when they're folded down, it'll make a much better dressing table than what I have in there at the moment, which is a mirror on top of a small laundry basket on top of a couple of wine boxes.
The top of the mirror is only three feet off the ground, which is totally impractical unless you really want to know how big your bum looks.  Which I don't.

Incidentally, if you try sandpapering varnish off wood, do not, on any account whatsoever, wipe the dust off with a damp cloth, even if you dry it immediately.  Why not?  Because it will turn into snotty gunge that makes the sandpapering even more difficult.

My friend's husband owns an electric sander which I could have borrowed to do the table, but I didn't think that would be a good idea.  I have enough trouble with the soup blender.

I thought it would be funny to draw an evil face on it, but now it won't wash off.  Perhaps I should try the sandpaper.  Or maybe I should make some soup, and see if that does the job.  Oooh, I wonder if my spicy homemade soup would dissolve the varnish on the table! 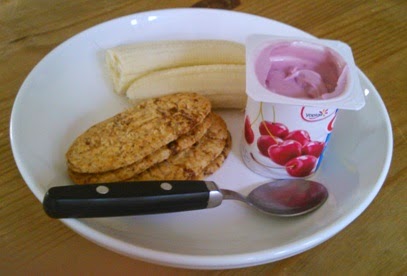 To be honest, I'm not sure that there's any milk in the yoghurt either, because I've thrown away the cardboard from the multi-pack it came in, and it was in French anyway.  However, I did have some milk in my tea, so that's alright then.  I shall just have to force myself to have some chocolate later to boost my fat intake for the day.
Posted by Val Ross at 3:39 pm No comments: