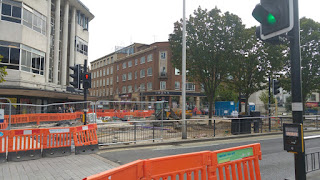 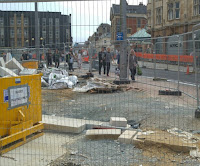 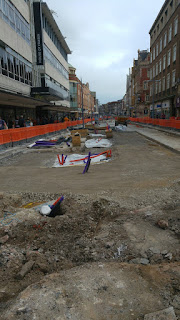 It's official; I'm allergic to my trousers.

It all started with a few little insect bites on my leg - except, on me, insect bites never remain little.  They go bright red and grow to the size of a 2p coin - and that's the smaller ones.  But they usually disappear in a few days, so I never bother with any treatment.  Big mistake, this time.
After about a week the marks {aka 'First Bites'} had gone, but then a whole load more turned up on my back.  OK, so I'd worn the same T-shirt, maybe that was the problem.  {Of course I'd washed it!  But only at 30 degrees, which obviously wasn't hot enough.}  This lot {Bites 2 - the return} were an irritable, itchy bunch and lasted a couple of weeks.  Then, just as they were going, a huge, 3-bite red mark appeared under my arm {The Blob - children of the Bite}.

After about six weeks, I realized the Blob wasn't going anywhere, so I went to see the nurse.  She said it looked like eczema, and had I recently changed my deodorant?  Well, actually, I had.  The Blob wasn't exactly where I apply deodorant, and it was only under one arm, but I threw out the new (cheap) stuff and bought some more of my usual (not cheap) brand.  She also suggested that I "try this cream".  That didn't work, so three weeks later I saw the doctor.  {The delay wasn't my procrastination, this time.  It just takes that long to get an appointment.}  At least he recognized a bite when he saw one, prescribed stronger cream and some tablets.

Before I could even begin the treatment, I noticed a nasty rash on my legs.  {Why do we always say, 'A nasty rash'?  Has anyone ever had a nice rash?}  It looked like a heat rash, only it wasn't hot weather and it got worse.  Thankfully, it seemed to respond to the tablets - but after the weekend, it was back.  Could it be unrelated to the bites, but due to something I wore to work, perhaps?  Or, {and much more likely, in my view} was I being consumed from within by some alien virus that would make my arms and legs drop off?

I think the surgery receptionist could hear the panic in my voice, as she gave me an appointment for the Thursday.  Now I have different cream, and stronger tablets that I have to take for a month and can't drink with!  And, apparently, because it's gone on for twelve weeks, I'm now even more sensitive to allergens than I was before.

Whilst this was in some ways reassuring to know, it has created a few problems.  I was due to have my hair coloured, but decided it probably wouldn't be a good idea to coat my head with chemicals at the moment.  Should I still have it cut, though?  Which is the better look, spikey and stylish but grey, or fluffy and floppy but black?  {I opted for short, because at least that looks intentional.  Even if people do think my intention is to look like a badger that lost an argument with a ceiling fan.}  On a more intimate note, should I really be using deodorant at all?  It can't be helping, but I hate the idea of being less than 'nice to be near'.  Also, it's quite possible that I've become allergic to the fabric of my work trousers.

Fortunately, I only have to wear my uniform for a few hours, and some days not at all.  {Because I work part time, not because I have that sort of job!}  I can wear a skirt to and from work, and change when I get there.  And, because I'm incognito, I can go without deodorant and scowl at people on the train without worrying that I'm bringing my employers into disrepute!
Posted by Val Ross at 6:01 pm No comments: