I've just been in the bathroom, and there are a load of black hairs all over the floor.  Not surprising really, as there are a load of black hairs all over my head.  {Although fewer than there were before, evidently.}  The worrying part is that the last time I was in there I got down on my hands and knees with some tissue and cleaning fluid, and wiped the floor very thoroughly.  It was completely hair-free, so where did the new lot come from? Now, I know there's a cocoa fairy and a cheese fairy in my house, because quite often in the evenings these refreshments appear next to me, as if by magic.  But I don't think I want a hairy fairy going round collecting up random strands and spreading them on the bathroom floor.  She probably thinks that's where the hair belongs, as there's often so much there.

{Oh my goodness, Hairy Fairies actually exist!  You can find anything on Google!  Caution: I have no idea what the app is like, or even if it's safe; I just like the picture.}

I've been away from home quite a lot lately, so it was rather nice to be in my own bathroom again.  {When I say 'bathroom', I mean the room with the bath in it.  I'm English.}  My friends are all very hospitable, with perfectly nice bathrooms, but I never feel really at ease using someone else's facilities.  For one thing, you can never be entirely confident about the lock on the door, however substantial it appears.  I don't have a problem with nudity - regular readers will know that it's clothes that I find difficult to deal with.  There's a TV programme called 'How To Look Good Naked'.  I'd prefer one called 'How To Find Clothes That  Don't Make You Look Lumpy, Frumpy Or Grumpy'.  No, planned nudity in an appropriate place is fine by me.  Being surprised in an unflattering position isn't.

So when I'm in someone else's house I tend to rush a bit, and don't stick to my normal washing routine.  {Yes, I have a routine.  That's because I'm rarely fully awake first thing in the morning, so it's easier to be on automatic.}  Stepping into an unfamiliar and unpredictable shower I take gel and scrubby net thing, but forget to take soap as well so I can't wash my face.  {I learned this time-saving trick from a friend, who also brushes her teeth in the shower, but I feel that wouldn't be advisable with an electric toothbrush.}  I'm then so keen to get dressed that I forget to use toner on my face as well, so my moisturiser sinks in to my open, grubby pores and clogs them up even more.  Then I realise, when fully dressed, that I've forgotten to use deodorant.  My face can take its chances, but I won't risk being smelly, so that means taking at least some clothes off again, and I can hear footsteps outside.... aaargh!

The healthy eating plan appears to be working, to some extent at least.  {Wine counts towards my '5-a-day', right?  Not too sure about orange jelly, but jam's got to be ok.}

Anyway, the good news is that I can now get into my old jeans again.  The bad news is, now that I come to look at them properly, {rather than weeping, screwing them up into a ball and throwing them across the room} I see that the fabric is now so thin {ok, stretched and worn} in some places that I can see right through it.  My beloved pointed out that many people wear jeans with 'designer rips' in them, but they're usually on the front, round the knees, not... higher up.  And although I'm pleased that my hips are a little smaller now, I really don't want to show the world.  There was nothing for it, I'd have to buy a new pair. 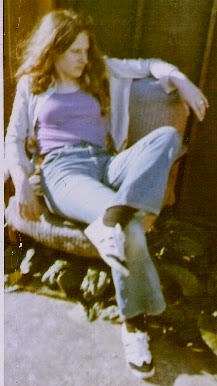 Regular readers will know that I don't like shopping.  But surely jeans, that most basic of garments, should be easy to buy.  After all, I actually knew, for once, exactly what I wanted; something similar to the style of jeans I've been wearing since I was 16. {Not the same pair, obviously.}  Pale blue denim, boot cut.  {Or, as they were described in those days, flared.}

The trouble is, it's now apparently autumn, so the only pale blue jeans I could find in the shops were actually leggins.  There were many pairs of dark jeans, apparently the only acceptable colour for the colder months ahead, but they were also 'skinny fit'.

Now, I have nothing against leggins; I own several pairs. But they only work  with a long, baggy top, otherwise they look, as my grandmother would have said, like you've forgotten your skirt.  Besides, I haven't had a summer holiday this year, so I'm still in strappy-top mode.

I did consider trying my favourite retail outlets, the charity shops - of which there are many in this town.  However, any jeans I could find in there would probably be just as worn out as the ones I already had.  Besides, jeans have to be tried on, and charity shop changing rooms aren't usually very private.  Yes, you can return purchases, but I always feel rather mean doing that.  I know it's less than a fiver, but if I could afford to donate that amount to charity I wouldn't be shopping there in the first place.

In the end I went home, rummaged through my wardrobe and, to my great delight, found another old pair of jeans.... that I can also get into again now!  Just about.  Provided I wear a long, baggy top.
Posted by Val Ross at 11:09 am No comments: