I like maps.  My first Girl Guide badge was map reading and, even though I say it myself, I'm good at it.  However, Belgium has defeated me.  Part of the problem has been that it's impossible to find a decent map of Belgium in the first place.

Our holiday rental is, literally, on the border; go out of the back door and you're in Belgium...

...go out of the front door and you're in France.

The closest town to where we're staying is actually in France, so I suppose I should have realized that the local bookshop would only sell French maps.  {"Ha, you want to go to Belgium?  You don't want to stay in la belle France, then it's your problem."}

However, we did find what looked like a very good map, at a scale of 1cm to 1km - ideal for exploring obscure places down country lanes.

Except it didn't work.  I've spent the last 3 days insisting that the map had roads missing, junctions in the wrong place and was not using any consistent kind of scale, while my Beloved was equally insistent that this could not be.  He holds a touching faith in all things vaguely official.    Finally, I did what I should have done in the first place, and looked on the internet.  {How anyone managed to plan military campaigns round here without Google Maps is a mystery.}
And I was right!  I must confess that we'd found it a little odd right from the start that our map had shown Belgium to be much emptier than France, with far fewer roads; on closer inspection we discovered that several roads starting in France just stopped abruptly at the border. 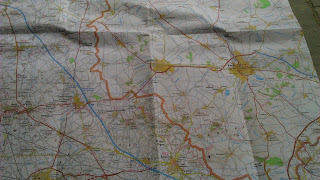 What we have is not a map, it's an artist's impression!  They might as well have coloured it all grey and written, "Here Be Belgians".
It doesn't help that most of the minor rural roads don't have numbers, they have names.  Which is all very quaint, but doesn't help at all, since the names are obviously too many letters to print on a map, always assuming that the road itself is on there in the first place. What's worse, most of the junctions don't have road signs and, if they do, you don't see it unless you're travelling in the opposite direction.
"Satnav", I hear you say.  Well, yes, we have borrowed one, but it's Homer Simpson, and I don't altogether trust him.  Also, it needs recharging, and the plug is bent and won't stay in.  But so long as we can stay on the motorway, we should get home alright!