What in the name of all that’s yellow was he thinking of?  Actually, I can imagine….

Maybe he was passing through the Cheddar Gorge on a bit of a progress and chanced upon a couple of dairy maids - well, knowing Henry, he’d have insisted on escorting them home and they, being perhaps of a hospitable nature, invited him to stay for breakfast.
As he’s riding away in the morning, Henry remarks to his loyal knights, “Ooh, that was a lovely feast last night! Go back and buy me some of that cheese for my personal consumption.” 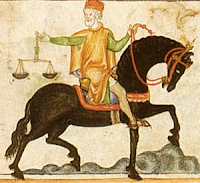 Unfortunately, Henry’s loyal knights are a bit hard of hearing; they think he said, “Buy me the sum of that cheese”, so they negotiate a deal for the entire year’s production of all the local dairies.  The whole nine yards.  Yep, a wall of cheese 9 yards long, a foot wide and over five and a half feet tall.  {One cubic foot of Cheddar cheese weighs 65.44 pounds.  Source: www.aqua-calc.com  So 10240 lbs of cheese is 156.48 cubic feet.}

So anyway, the cheese gets home before Henry {he being delayed by more hospitable ladies} and Queen Eleanor has to decide what to do with it.  As it’s labelled “For the King”, she can’t just send it to the kitchen where anyone can get at it.  To be honest, she’s a bit put out that it’s taking Henry so long to return, so she has a bright idea…

When Henry does eventually turn up several months later, he finds he can’t unpack because the few garments he left at the palace are strewn across his bedroom floor, and all three of his wardrobes are full of cheese.  {Assume a wardrobe four feet wide, two feet deep and six feet tall, i.e. having a capacity of 48 cubic feet} There’s also a substantial block of cheese on his bedside table but, as Henry’s feeling a bit peckish after all the progressing he’s been doing, that soon disappears.  In fact, as he offers Eleanor a bit, she forgives him for neglecting her and lets him have a mouthful of her Golden Delicious to go with it.

What to do with the rest of it, though?  Cheddar cheese does keep for quite a long time in the right conditions, but Henry hates living out of a suitcase, and he wants his wardrobes back.  He decides to have a cheese and wine party but, as neither pineapples nor grapefruit have been invented yet, his cheesy hedgehogs don’t look quite as exotic as he’d hoped.

Also, his loyal knights point out that the cheese was, by his own command, for the king’s personal consumption and so, if they can’t have any cheese, it’s only fair that they get to drink all the wine.

Now, Henry does, as we all know, have a bit of a temper, and not getting any wine irks him somewhat.  “They’re not doing that at my next party!” he rages.  “What can I do?”
Eleanor, being of a French persuasion, (and devious nature, as we’ve already seen) suggests a delicacy from her homeland - fondue.  “Ha! Yes!” Henry agrees.  “I’ll mix all the wine in with the cheese, and have it all myself!  Those knights can just have the little bits of stale bread.”  This was, he realised later, a bit of a mistake.  When you’ve got the worst cheesey hangover in history you could really do with a bit of stale bread.

Christmas was fast approaching now and, with two and a half wardrobes still full of cheese and nowhere to hang his new jumpers, Henry toys with the idea of sending some of the Cheddar as seasonal gifts to his fellow monarchs in Europe.  “It’s labelled, ‘For the King’, but it doesn’t say which king,” he points out.

“Unfortunately, your Majesty,” the Lord Chamberlain informs him, “under French regulations it can’t be classed as ‘cheese’ because it’s the wrong colour and it’s far too hard.  They won’t even let it pass through their country, I’m afraid.”

This is just the last straw for Henry.  {He had tried cheese straws, but the crumbs got everywhere and Eleanor had come out in a rash from when he’d been eating them in bed.}
“Will no-one rid me of this troublesome cheese?” he demands.  Sadly, as we know, his loyal knights are somewhat deaf and they miss-hear him again.  Which leads to the unfortunate events in Canterbury on 29th December that year.